Hey Yui, could this be a future electric Toyota Crown?Meet the Toyota bZ Compact SUV Concept which offers a glimpse of what the expanding bZ (Beyond.. 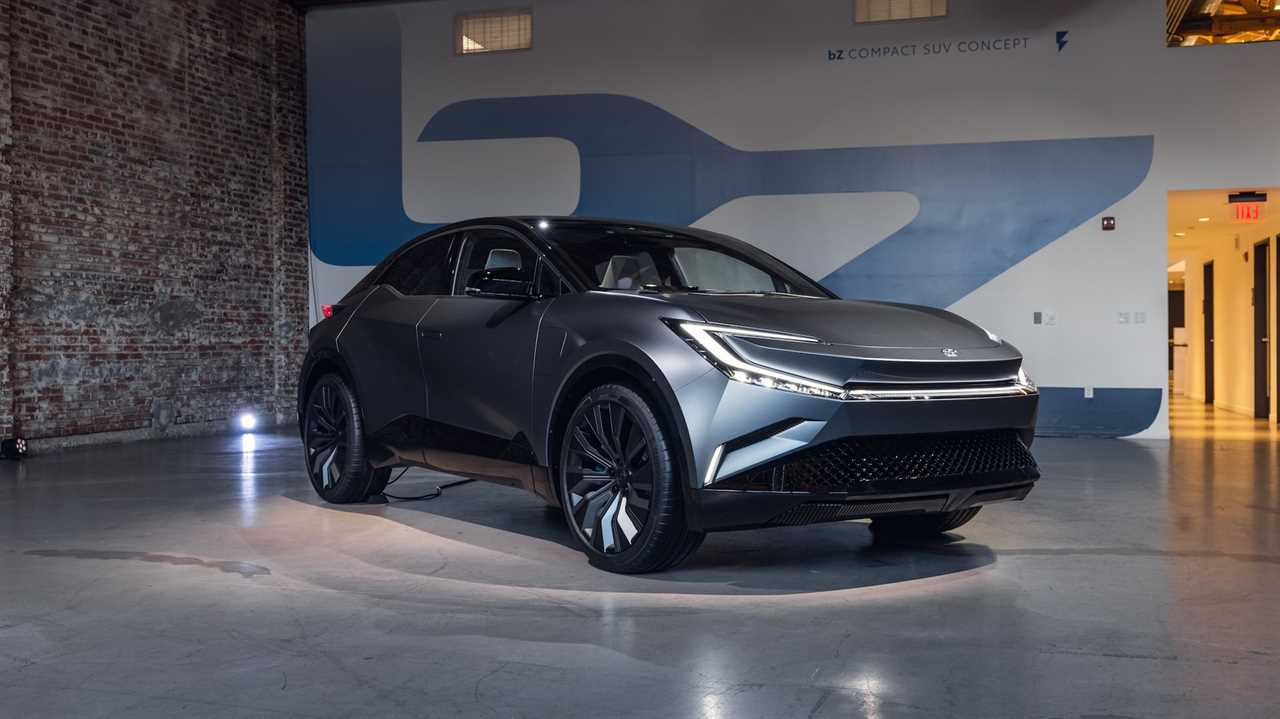 Hey Yui, could this be a future electric Toyota Crown?

Meet the Toyota bZ Compact SUV Concept which offers a glimpse of what the expanding bZ (Beyond Zero) family has in store, and hints at what an electric Toyota Crown might look like, and introduces Yui, the Japanese voice assistant.

The bZ Compact SUV concept has sharp lines, angular trim pieces, deep creases and an extreme narrowing of the body in the middle. The SUV has a low roofline and small greenhouse with a funky, chunky, squared-off rear. It has a glass roof, but it is not solar-paneled. For better aerodynamics, the wheels were pushed to the corners and the vehicle has short overhangs for a lower coefficient of drag.

While the exterior is busy, the interior is minimalist, with a yoke (yelp), and lonely-looking gearshift sitting in the center console between wireless charging pads. The two screens curl at the bottom to provide 10.3-inches of screen for the driver and a 14-inch center screen, neither of which sit so high as to impede vision. The system is designed to be more intuitive and responsive to voice commands.

Yui, the in-car personal assistant, will accept voice commands from any of the vehicle's five occupants. A glowing blue ball on the dash responds to "Hey Yui," shining brighter and pulsing as it accepts directions, does a little thinking, and then performs the task at hand, such as turning on the air conditioning. A blue strip lights up in the rear seat center console if the commands come from the second row.

The concept uses sustainable materials including recycled plastic from pop bottles and has plant-based ultrasuede seats and door panels. The window controls are imbedded into the door material.

While a concept, this bZ could be put on a production platform, we are told.

The concept has Toyota's new Beyond Zero badging, which debuts on 2023 Toyota Prius family and denotes all electrified vehicles going forward to show the automaker's commitment to a zero emissions future. It consists of a blue circle logo with HEV (for hybrid electric vehicle), BEV (battery electric), FCEV (fuel cell electric) and in many countries PHEV (plug-in hybrid electric) but in the U.S. it will say Prime. Toyota's only battery-electric vehicle, the bZ4X compact SUV, will adopt the new badging for the next model year.

"We've only just begun to scratch the surface of the Beyond Zero moniker," said Toyota general manager David Christ. "With an aerodynamic design coupled with intuitive tech features never before seen in a Toyota model, the bZ Concept showcases another possible vision of the very near future with our battery electric vehicles."

Toyota has been criticized for being behind the curve when it comes to electric vehicles, putting more resources into its hybrids and plug-in hybrids. The only battery electric it offers is the bZ4X with a range of about 252 miles at best—and it is slow to charge. Toyota also has the Mirai, which is a fuel cell vehicle (and only available in California). And Toyota President and CEO Akio Toyoda is a proponent of hydrogen-combustion engines.

Toyota's global lineup consists of 10 hybrids, two plug-in hybrids, one battery-electric vehicle and the Mirai FCEV. The automaker has announced it will invest more than $70 billion in electrified vehicles over the next nine years, with $35 billion committed to BEVs. Plans are to expand to about 70 electrified models globally by 2025 with seven BEVs. By 2030 Toyota will have 30 EVs and the goal of selling 3.5 million EVs annually. Currently, less than 25 percent of the lineup is electrified and of that, 22 percent are hybrids.

By contrast, Ford is spending $50 billion through 2026 to be able to produce 2 million EVs annually, and General Motors wants to stop making vehicles with internal combustion engines by 2035.

Did you miss our previous article...
https://247healthdaily.com/cars/2023-porsche-911-dakar-first-look-the-rugged-911-fantasy-realized